THE PERFECT WAY TO START 2023
VISIT YOUR FAVORITE DESTINATION ON NEW YEAR’S EVE
LOS CABOS, ARE YOU READY FOR THE ADVENTURE?
PUNTA CANA, THE HEART OF THE CARIBBEAN!
ORGANIC ARCHITECTURE; A VISIT TO THE TALIESIN HOUSE...
THE BEST KEPT SECRET OF PUERTO VALLARTA
WHAT TO DO ON YOUR VISIT TO PUNTA...
THE 10 THINGS YOU NEED TO DO ON...
FALL IN LOVE WITH THE BEAUTIES OF PUNTA...
ENJOY COZUMEL TO THE FULLEST 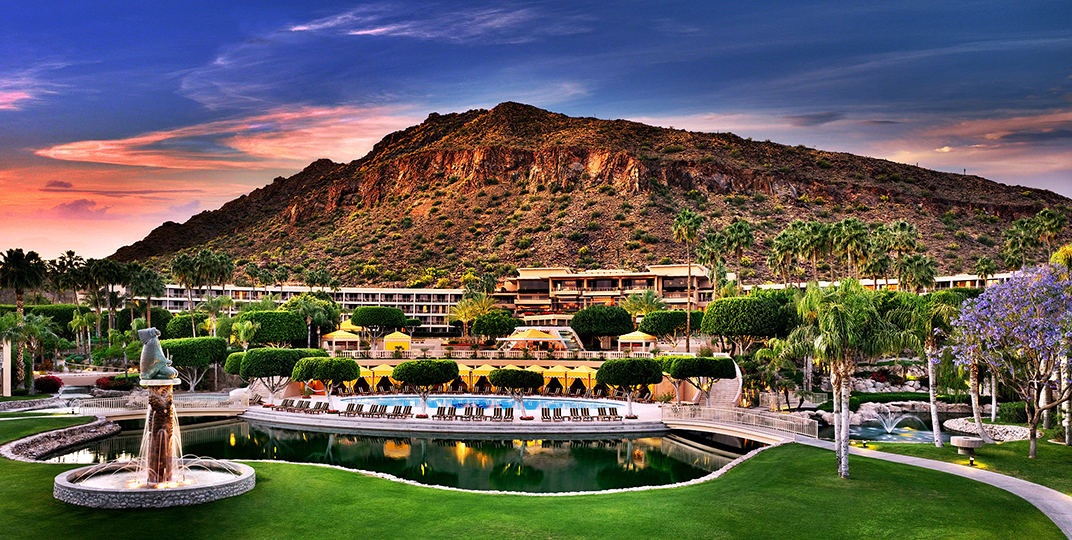 The city of Scottsdale, Arizona, calls itself “The West’s Most Western Town,” and many Royal Holiday members have found out for themselves that this desert paradise could easily serve as every tourist’s dream destination. Located just northeast of Phoenix, Scottsdale offers a unique blend of resort city fun and high-end class that has made it one of the most popular destinations for savvy tourists seeking an unforgettable and luxurious experience. Royal Holiday members have a chance to experience this amazing city from the comfort of one of its many fine hotels, the Scottsdale Camelback Resort.

The hotel, which takes its name from the mountain towering over its 11 acres of desert splendor, offers easy access to everything in Scottsdale, ranging from “Old Town” and the shopping district to the region’s many golf courses and parks. The comfortable villas, which are decorated with Southwestern panache and which feature everything from private patios and whirlpool baths to laundry facilities and fireplaces, serve admirably for those looking to take things slow. The resort itself provides a stunning range of activities, including space for racquetball and tennis enthusiasts, a charming desert garden and labyrinth, an on-site putting green, and a number of trails set within the resort’s grounds. The resort’s activities department ensures that even Royal Holiday members who never leave the hotel will be fully entertained with Native American flute lessons, video game lounges, putting tournaments, and more.

The city of Scottsdale, originally home to the Hohokam tribe, was first settled by a U.S. Army Chaplain in the 1880s and expanded to its current size after major regional dam projects brought in large populations. The incorporation of Scottsdale in 1951 saw a registered population of only 2,000 individuals. Less than 20 years later, this ballooned to nearly 70,000, as the city’s resort culture began to take root. Providing access to arts, culture, and excitement, Scottsdale has earned a reputation as one of the most pleasant cities in America.

Scottsdale has always been a mecca for artists, and Royal Holiday members will do well to explore the city’s exciting public artwork, including architectural marvels by Frank Lloyd Wright and Paolo Soleri. The Scottsdale Museum of Contemporary Art compares favorably to the museums of the biggest cities in the country, and many of the impressive monuments and installations can be easily seen from the Scottsdale Downtown Trolley. Gamblers will enjoy access to Native American-owned casinos, while families can enjoy outings like AZ on the Rocks, a huge indoor climbing gym, or indoor racing at the go-kart track of Octane Raceway.

Many Royal Holiday members travel to Scottsdale to experience the American West firsthand, however, and the city does not disappoint. A number of exciting annual events draw tourists every year, including the Scottsdale Arabian Horse Show and the Scottsdale Jaycees Parada del Sol. Cowboys and girls alike will enjoy rodeos and horse events, and the kickoff event for the Parada del Sol event, the Parada del Sol Parade, has more horse-drawn floats and carriages than any other in the world. After a day celebrating the rustic West, many Royal Holiday members will be drawn by the city’s scintillating nightlife, which has earned recognition from the New York Times and other major publications.