Every year to Cozumel 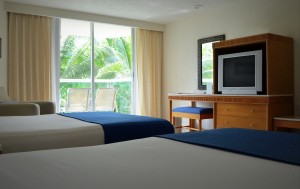 That Annual Trip Gets Easier When You Know Where You’re Going.

Georgette Pushkin and husband, Marty, have been Royal Holiday members since 2003. They’ve stayed at Cancun, Los Cabos, and several condo resorts in the United States.

But the truth is, every year since 2009 they’ve traveled to Cozumel to stay at the Park Royal Cozumel.

We spoke with them this past February during their annual seven-day trip, their fifth year in a row. Year-round residents of Beaumont, Texas, we chatted the Pushkins up on the deck of the infinity pool about how they came to be booking the same resort year after year.

Well, what happens after all? You get here, and it makes more sense than where we were. We’re quite happy in Texas, but there’s a direct flight from Houston in February – every February – so every year we figure why not?

“I book as soon as we’re able to and it comes to less than 15,000 credits, and that’s about the limit we’re spending anyway. It’s not a bad deal at all. I mean, for me it’s like this… when we’re at home we have all kinds of things to do and we’re accustomed to eating out a few times a week. That’s not every day by any means. But we’re also not big cooking fans. I mean, we do the cooking, we do the cleaning up. But every day it’s got to be on our minds. So we come here every February now, and one thing we don’t do is worry about cooking.

“There’s always plenty to do. And we have been all over the island, but half the time we stare at the sea, and at each other. I have gone snorkeling a few times. I might get back out there this year, but you never know.

“For me, what makes it work is that it’s complete, and it doesn’t feel too, too big. I think it’s a very well planned resort. There is space, and our little (studio) room is enormous by the standards of most hotels in the States. We can sit on the balcony.

“The food is magnificent.  I’ve gotten tired of other buffets and probably after seven nights I am ready to cook again for myself, but every year we come back and these people are constantly working to keep everything clean and fresh – and it’s not just one or two things that are good. Most of it – almost all of it – is very, very good.

“The funny thing is, we basically do half of it in our sleep. [laughs] We have to be awake to catch the plane. Once we get here, it’s like a dream. I’d say it’s a dream, but I guess I never feel quite so awake as when we’re here. I’d guess it’s among the most perfectly awake moments I have all year.

“Next year? Well you never know. I’d say it’s a safe bet we’ll be back. It’s really only seven days, so we’re not always willing to branch out and do something really, really new. But who knows?

“I guess we’ll decide around the first time someone tells us it’s snowing.”